Cover & Concealment: It’s not just for the military anymore!

It’s a sad commentary on the state of the world that so many terms and issues that originally belonged to the military (like “cover & concealment”) have not only become common in the world of law enforcement, they have now become common in everyday civilians’ lives.

I was just going over the FBI’s 2014 report on Active Shooter Study (covering 2000-2013). Surely enough, there is a continuous rise in the number and frequency of these shootings. If you’d like to read the whole report, click HERE. And this report doesn’t even cover the crazy things that have happened from 2014 to now!

Well, as you know, here at LaBCaF, LLC we try not to instill fear into anyone (except bad guys). So we don’t talk about what could happen to you or your family in your own home, in your workplace, where you go to school, where you shop, or worship. All of those stories, statistics, and awful pictures and videos are online for anyone to find. We focus on how to be READY; how to be SAFE; how to SURVIVE & ESCAPE!

But, since so many government agencies and news stories are telling us that “shooting” incidents are on the rise in towns of every size, I want to explain the concept of “concealment & cover,” but in particular, cover.

“Concealment,” as you might guess, means “hiding.” Hiding yourself, your children, family members you’re caring for, and so on. Hiding protects you from being SEEN and hopefully from being involved or targeted in a dangerous situation. But “concealment” doesn’t necessarily protect you from being injured.

You can conceal yourself behind a curtain so that a shooter can’t see you. But that doesn’t mean you can’t still be injured by bullets or other dangerous objects. Hiding may allow you time to call for help, for the threatening person to pass you by while looking for other victims, or for help to arrive. Use concealment whenever you can, but, to be even safer, you’ll want to use “cover.”

If you’ve ever watched an action oriented TV show or movie that involved guns or exploding things, you’ve certainly heard someone in the show yell “Take Cover!” They usually yell that because they realize that something dangerous is coming at them: bullets, flying debris, or even flying monkeys (depending on the movie you’re watching!). But in the real world, there’s not always someone yelling directions for you to protect yourself. This is why we focus on “situational awareness” in every class we teach. You can’t protect yourself from something you’re not even aware of.

So “cover” gives you some amount of protection from whatever it is that is flying at you. It could be LOTS of cover, like a bomb shelter, or it could be a very small (but still useful) amount of cover like standing behind a pole. ANY “cover” is better than no protection at all. 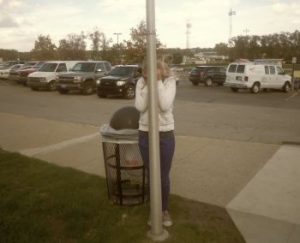 The most important vital organs of our body are generally in the center. So you can see that even a narrow pole can protect the majority of your super-important parts – brain, spine, lungs, heart, and liver. Those are what you want to protect most! But, thanks to modern medicine, even injuries to those parts can be survived in many instances.

Remember this too – it’s ok to move from one place to another; from one place of cover to another. If you are currently hiding behind a pole but there’s a brick wall a few steps away, it’s probably a good idea to move to the better cover. It might be risky to move, so you have to keep your awareness level switched to “high.”

If bullets or other things are currently hitting everything around you, don’t move. But if a bad guy is now shooting somewhere else or is distracted and not looking in your direction, move to the safer location – but do it quickly! While you’re moving, try to use any “concealment” that’s available: stay in shadows, crawl through or behind bushes, tall grass, piled up garbage, cars, etc.

Cover and concealment are everywhere, IF you know to look for it. It is so important, we dedicate a portion of every class we teach to cover and concealment. Why? Because the threats we must deal with today are far more complex than just a single burglar or robber. There are violent people who just want to hurt others. There are gang drive-by shootings (yep, they still happen). There are riots and terrorists. Even good guy bullets can end up going where they shouldn’t!

So stay aware. Look for places to hide in the places you frequent (home, work, stores, church, school, etc.). Do the same with “cover.” The more familiar you are with where cover and concealment are in your areas, the faster you’ll be able to use them in a dangerous situation.

It’s hard to believe, but I really miss the good old days when we were just worried about the flying monkeys!